Edwin Thomas Booth (1833–1893), according to some historians, was the greatest American actor of the 19th century. He acted throughout the US and Europe, often in Shakespearean roles, and founded Booth's Theatre in New York City in 1869.

He and his brothers John Wilkes Booth and Junius Brutus Booth, Jr., made their only performance together in Julius Caesar on 25 November 1864 (just several months before John Wilkes Booth assassinated President Abraham Lincoln in April 1865) to raise funds to commission a statue of Shakespeare. The benefit collected $4,000 for the effort. John Quincy Adams Ward, who assisted Henry Kirke Brown in sculpting the equestrian monument of George Washington (completed in 1856) in New York City's Union Square, was chosen for the work and his bronze of the Bard was finally unveiled in Central Park in 1872. (The presidentially-named Ward's association with US presidents was strengthened with his standing statue, unveiled in 1882, of George Washington before the Federal Hall National Monument in the approximate location of Washington's inauguration in 1789 when New York City was the capital of the United States of America.)

The incident occurred while a group of passengers were late at night purchasing their sleeping car places from the conductor who stood on the station platform at the entrance of the car. The platform was about the height of the car floor, and there was of course a narrow space between the platform and the car body. There was some crowding, and I happened to be pressed by it against the car body while waiting my turn. In this situation the train began to move, and by the motion I was twisted off my feet, and had dropped somewhat, with feet downward, into the open space, and was personally helpless, when my coat collar was vigorously seized and I was quickly pulled up and out to a secure footing on the platform. Upon turning to thank my rescuer I saw it was Edwin Booth, whose face was of course well known to me, and I expressed my gratitude to him, and in doing so, called him by name.

Months after the incident, Edwin Booth learned the identity of the man he rescued when Booth received a letter from Colonel Adam Badeau, an officer on the staff of General Ulysses S. Grant. Badeau informed Booth that the man Booth rescued was Robert Todd Lincoln, who also was on the staff of General Grant and was the eldest son of President Abraham Lincoln. This knowledge is said to have comforted Edwin Booth following his brother's assassination of President Lincoln. 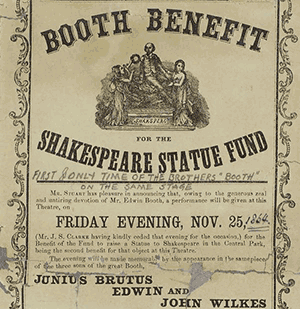 Portion of the playbill for the Booth Benefit for the Shakespeare Statue Fund. 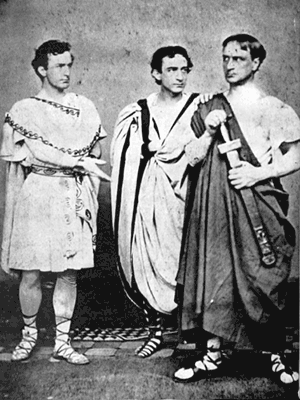 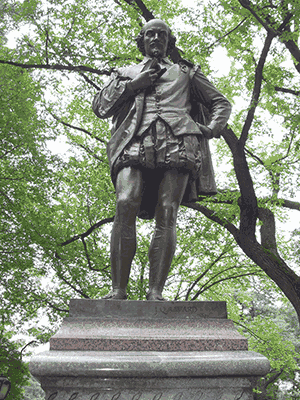 A new window or tab will open: